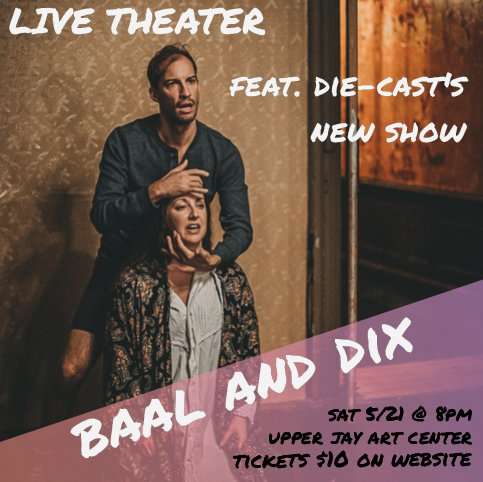 The Weimar Republic of Germany, nestled between two wars, found itself on a rising tide of moral panic. Politicians stoked fear by pointing at homosexuality, Judaism, and Communism as corrupting forces. Young German boys were being recruited into this deviant lifestyle cried, concerned citizens. Baal and Dix looks at this time in history as a mirror to our own.

In this riveting original piece of immersive theater being developed this May at the Upper Jay Art Center, Philadelphia-based theater company Die-Cast draws from the early work of playwright Bertolt Brecht, whose identity as a Jewish Marxist collided with the violent patriotism of his time. Embedded in his progressive work was a male-centric view of queerness and an often violent misogyny, as epitomized in his play Baal. Other inspirations include the imagery of Otto Dix, whose critique of war led his work to be tossed into the bonfires with other “degenerate” artists. Yet the male gaze of this movement used bodies of naked prepubescent girls as a reoccurring subject. In such, Baal and Dix explores the dichotomy of these artists, finding both the important progressive steps they took as well as their blindspots around gender, and masculinity in particular.

Baal and Dix is an episodic romp around the Recovery Lounge. Audiences are not confined to their seats, and they can make their own way through the space and the story. Show-goers may find themselves in a waltz with a performer, toasting with a secret shot, or engaged in a private monologue. This immersive showing will pour our audiences a drink and then dive into the messy past that is still shaping our present.