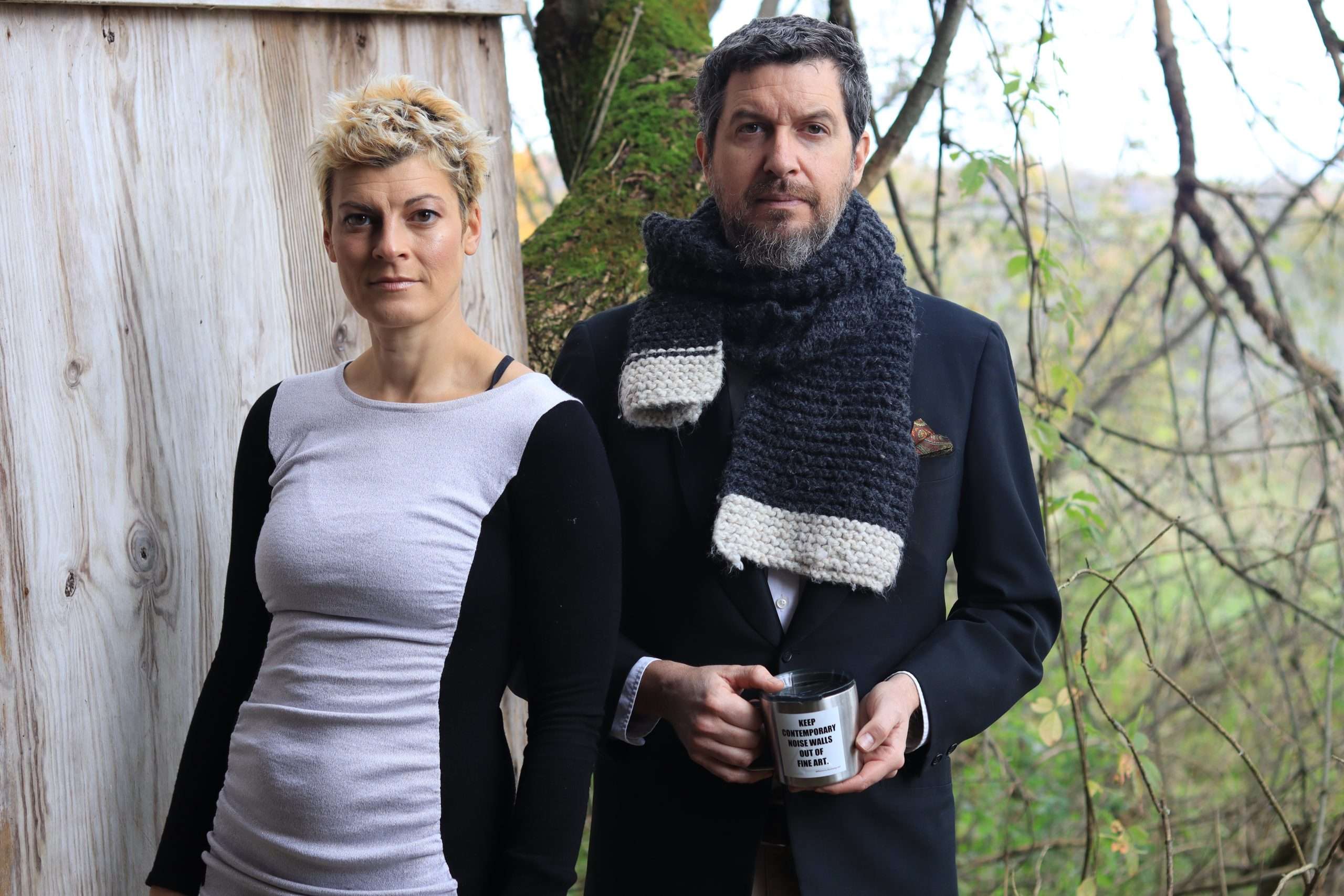 Ola Aldous emigrated from Ukraine as a child in 1991, where she had studied in the Kharkov Special School of Music for Gifted Children, a rigorous school for young musicians. Ola received her bachelor of music degree in piano performance from Crane School of Music and a Bachelors of Fine Arts concentration in painting and drawing at SUNY Potsdam. Ola has released multiple experimental music albums in Europe, both as a solo artist and with her partner, Claude. She illustrates the experimental music publication Deft Esoterica and contributes regular illustrations to the British experimental music publication TQ. She maintains an active practice as both a visual artist and a musician.
Claude Aldous’ interest in industrial music led him into classes in electronic music composition, with activities including a college radio show, booking live music, running a recording studio, and starting a record label. When he and Ola first connected, he was active in five different music ensembles, traveling hours away to perform “locally”, and frequent far away dates in NYC, Boston, and Montreal. The purchase of a reproduction of the semi-modular synthesizer from his music school’s electronic composition studio snowballed into building a fully modular synthesizer, designed more for abstract sound design than for playing beats and sequences. Soon he and Ola were on the road, both as a duo and with the experimental quartet Figure From Ground, as well as the first issue of Deft Esoterica, and Aldous Estate Mastering.
Jerod Sommerfeldt’s music focuses on the creation of algorithmic and stochastic processes, utilizing the results for both fixed and real-time composition and improvisation. His work explores digital and audio artifacts and the destruction of technology, questioning the dichotomy between the intended and unintentional. An active performer as both soloist and collaborator in interactive digital music and live video, he currently serves as Assistant Professor of Electronic Music Composition and Theory at the State University of New at Potsdam Crane School of Music., and as director of the SUNY-Potsdam Electronic Music Studios (PoEMS).
Michael Hart is the principle of the Pouring Light Studios in Malone that closed in 2020 after 10 years of activity presenting concerts, open-mic nights, and gallery exhibitions. Both a curator, sculptor, artist, photographer, and musician, Michael compares himself to a “stone mason who has a surplus of stone close at hand. I surround myself with sound inducing implements. Core influences include a musical family and several years working in heavy industry where the drone was deeply implanted in me. So much to work with and when all seems quiet, there is the hiss of electrical energy coursing through the wires.”

Echo is at the center of a new “art farm” effort in Onchiota, called The Station. Echo is a benevolent prankster who creates opportunities for humans to experience unexpected sonic occurrences. Using Arduino circuitry and found objects Echo creates reactive sound sculptures that seek to surprise people and make them feel nervous, delighted, and even slightly confused. Echo will offer an interactive piece that will be available, outside, throughout the day for people to use Ten participants will be invited to realize a 15-minute group performance where everyone can take turns rotating in and out. This piece will involve micro FM transmitters and handheld radios.

This project is made possible with funds from the Restart NY Regrants 2021-22 Mini-Grant program, a regrant program of the New York State Council on the Arts with the support of the Office of the Governor and the New York State Legislature and administered by the Adirondack Lakes Center for the Arts.