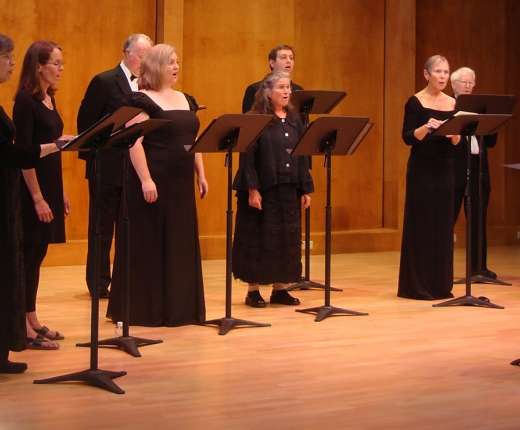 Tapestry, the All-Centuries Singers, under the direction of G. Roberts Kolb, will present motets and anthems for the advent and Christmas seasons, including several settings of the German advent chorale “Macht hoch die Tür.”  The program also includes anthems from colonial America, motets by French composers from three centuries, a set of motets by the 17th-century Netherlandish composer Jan Pieterszoon Sweelinck, and a bit of Christmas traditionals for dessert.

Tapestry is an ensemble of 21 voices who come together from around central New York to share their love of choral singing with one another and with their audiences.

G. Roberts Kolb is the Marjorie and Robert W. McEwen Professor of Music and Director of Choral Music at Hamilton College, where he is a past holder of the Christian A. Johnson “Excellence in Teaching” Chair. A graduate of Occidental College, his postgraduate education includes a year of study at the School of Theology at Claremont, California, a master’s degree in Choral Conducting from the California State University at Fullerton, and a doctorate in Choral Music from the University of Illinois. He is a contributing author to Up Front! Becoming the Complete Choral Conductor (E. C. Schirmer) and Five Centuries of Choral Music (Pendragon Press). Before coming to Hamilton College in 1981, Dr. Kolb taught at Smith College, where he conducted the Smith Choirs and Glee Club. Past musical director of both the Syracuse Vocal Ensemble and the Cayuga Vocal Ensemble (Ithaca, N.Y.), he is currently director of music at the Stone Presbyterian Church in Clinton, N.Y., and artistic director of the Catskill Choral Society. Active in the musical theatre world, he has directed Gilbert and Sullivan productions for the Earlville Opera House and been musical director for several Summerstage productions at the Rome Capitol Theatre. Onstage roles include Cervantes/Don Quixote (Man of La Mancha), Sweeney Todd (Sweeney Todd), The Lord Chancellor (Iolanthe), The Cowardly Lion (The Wizard of Oz), Henry Higgins (My Fair Lady), Nicely-Nicely Johnson (Guys and Dolls), and Captain Hook (Peter Pan).