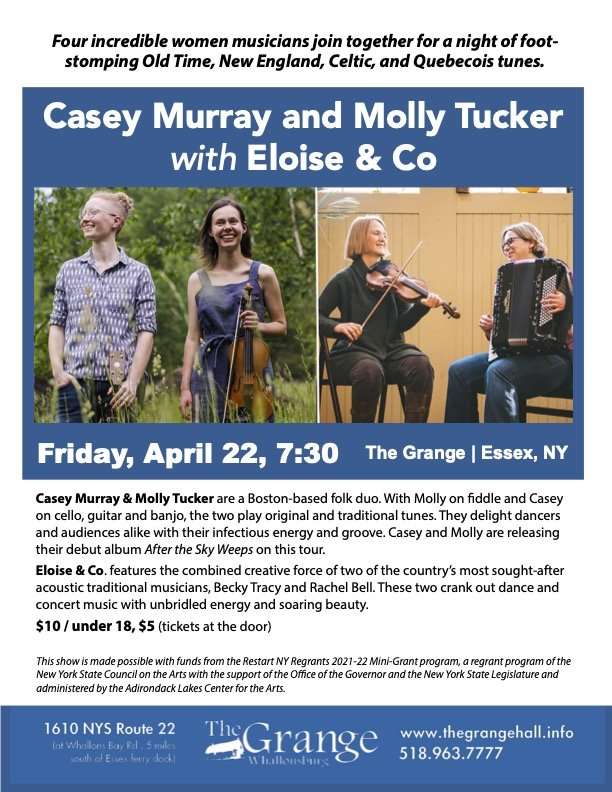 Four incredible women musicians join together for a night of foot-stomping Old Time, New England, Celtic, and Quebecois tunes. $10 / $3 under 18.

Casey Murray & Molly Tucker are a Boston-based folk duo. With Molly on fiddle and Casey on cello, guitar and banjo, the two play original and traditional tunes in Celtic, New England, and Old Time styles. They spent their first two years as a duo writing tunes and songs from a distance while Casey attended Berklee College of Music and Molly attended Oberlin College and Conservatory. Now both residing in Boston, the two delight dancers and audiences alike with their infectious energy and groove. Casey and Molly are releasing their debut album After the Sky Weeps on this tour and it will be on sale at the show!

Eloise & Co. features the combined creative force of two of the country’s most sought-after acoustic traditional musicians, Becky Tracy and Rachel Bell. These two crank out dance and concert music with unbridled energy and soaring beauty. Originally thrown together at a gig where Becky led the contra dance portion of the evening and Rachel led the French dance part of the evening, they have continued to fuse these two elements into their concerts and dances, as well as adding songs and original compositions to the mix. Their first recording, “More, Please” was released in July of 2018, and as the name suggests, they went on to record another album in June, 2021.