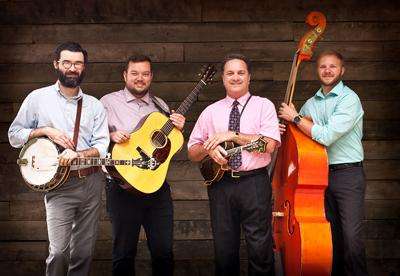 The award-winning Larry Stephenson Band has been entertaining audiences for 30 years…
including their numerous performances on the Grand Ole Opry, RFD-TV and headlining festivals and concerts across the US and Canada. Highly regarded as one of Bluegrass music’s most recognizable and finest high lead vocalist, Larry Stephenson is a Virginia Country Music Hall of Fame member and 5-time Society for The Preservation of Bluegrass Music in America (SPBGMA) Male Vocalist of the Year. They also inducted Stephenson into their Hall of Greats in 2018. With numerous IBMA and SPBGMA nominations and awards, Larry records on his own label, Whysper Dream Music.

Born in Harrisonburg, VA and raised in King George, VA, Larry’s Dad put a mandolin in his hand at the age of 5 and by the age of 11, Larry cut his first record. Graduating high school in 1976, Larry and his Dad had a very popular regional band for 3 years, performing at festivals, concerts and regulars at The Wheeling Jamboree in Wheeling, WV. From there, he worked with Cliff Waldron, Leon Morris while soaking up the Washington, DC rich musical scene. In 1979, Larry went to work with Bill Harrell and The Virginians for 4 ½ years and then in June of 1983 went to work with The Bluegrass Cardinals and stayed for 5-½ years. That band configuration is often referred to as one of the “classic lineups of the Bluegrass Cardinals.” Larry also credits the rich music scene of Virginia and Washington, DC for much of his musical success, having seen and heard the first-generation bluegrass performers in person and on radio.

While Larry Stephenson is best known as a touring musician whose voice sets a standard of melody, clarity and storytelling, he has had an active and well-awarded recording career. Starting his recording career for Webco Records of Virginia and then 18 years with Pinecastle Records, releasing 18 albums during that period. Signature songs in Larry Stephenson’s vast catalog in that period include Patches, Yes, I See God, Clinch Mountain Mystery, Many Hills of Time, The Knoxville Girl, The Knoxville Boy, The Pretty Blue Dress, I Should’ve Called and The Violet and The Rose.