Robert Rogers and His Rangers Return to Ticonderoga 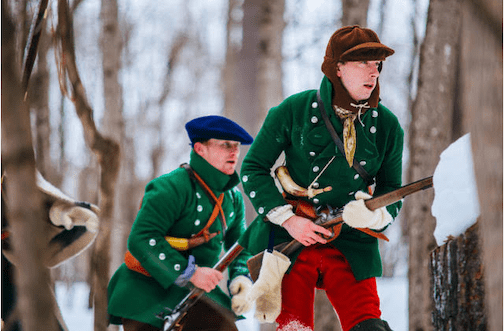 Robert Rogers and his Rangers return to Fort Ticonderoga through the dramatic 1759 Battle on Snowshoes reenactment!

The Battle on Snowshoes event vividly recreates the final winter battle between a scout of Mohawk warriors, British Regulars, and Rogers’ Rangers, versus the French garrison of soldiers, Canadians and Native American warriors at Fort Ticonderoga on March 7, 1759. This event is designed to be a rich experience for guests of all ages as they explore the final Battle on Snowshoes within the year 1759.

Throughout the day, visitors will explore life for the French garrison inside Fort Ticonderoga, discovering the sights and sounds of daily life for the soldiers guarding French Canada’s front line. Hear the rousing beat of French drummers during a 12:30 p.m. concert highlighting the songs that regulated military life and learn the words to French folk songs that soldiers enjoyed as they worked. Savor the aroma of a hearty soup as it is prepared using dried and salted rations. Tour through the French soldiers’ quarters and watch as soldiers cut the firewood used to heat them. See the few simple luxuries of the Officers’ quarters and learn more about the dire situation for French Canada in 1759.

Hands-on programming explores the components of French artillery ammunition as Fort Ticonderoga staff recreate the shot stockpiled for the coming summer siege. Strap on your snowshoes and march out to the edge of frozen Lake Champlain to see the real battlefield for the 1759 presentation of the Battle on Snowshoes. During the 1:30 pm battle, become immersed as the Rangers ambush turns into a fight for their lives and the French attempt to cut off their retreat. Winter footwear is strongly encouraged!