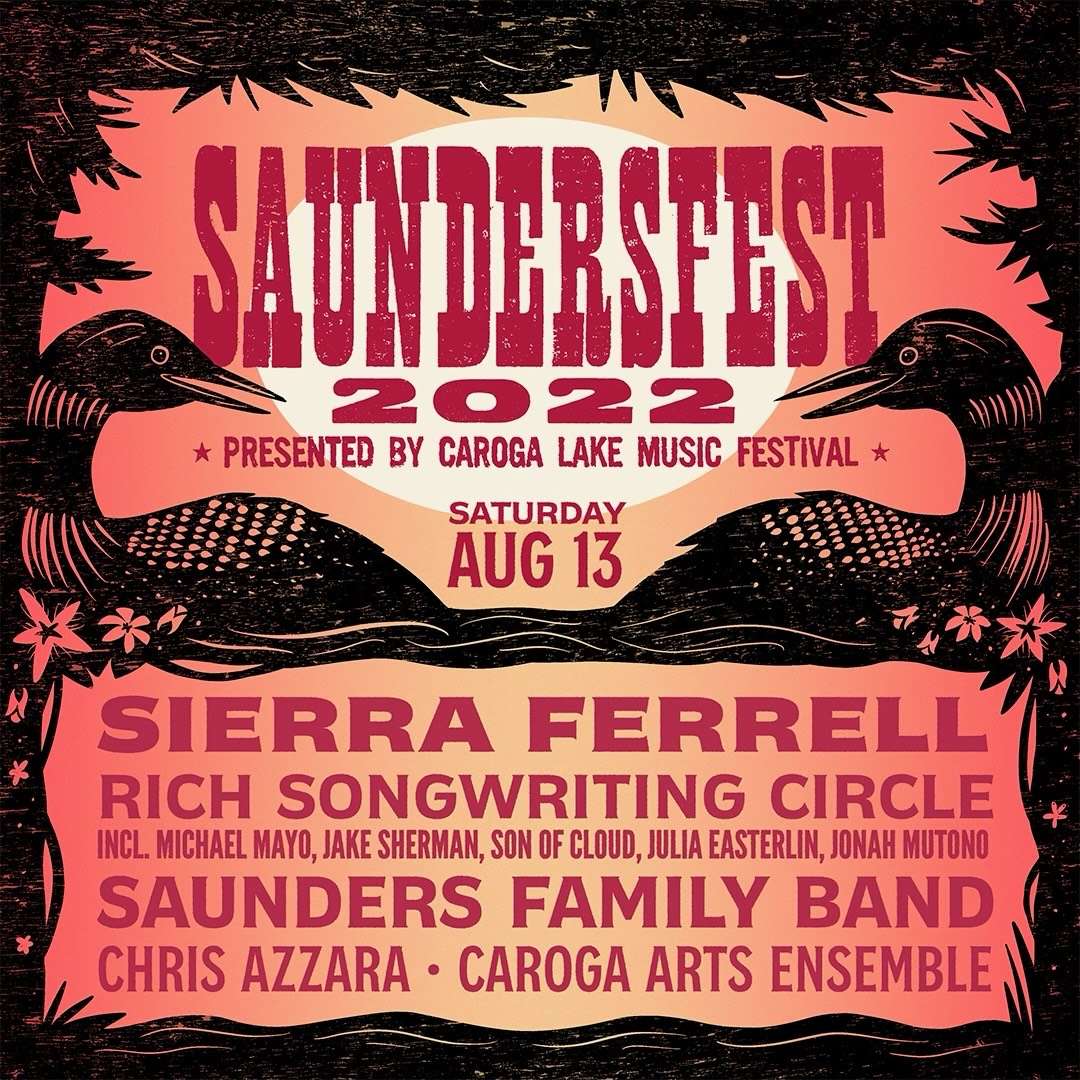 The All-day Americana Music Festival SAUNDERSFEST will take place on Saturday, August 13 from 2-10pm.
About this event

SAUNDERSFEST
Featuring world acclaimed bluegrass and folk artists from across the country, the All-day Americana Music Festival SAUNDERSFEST will take place on Saturday, August 13 from 2-10pm.
General schedule includes:
Bluegrass jam with Rob Saunders
Jazz with Chris Azzara
Caroga Arts Ensemble
KASA Quartet
Singer/Songwriter Circle with Rich and Friends
Saunders Family Band
Featuring Sierra Ferrell
Tickets: $25 for Sierra Ferrell pavilion, Open General Admission
Sponsored by ZASH
SAUNDERSFEST started 10 years ago on a small porch on Canada Lake in the beautiful Adirondacks, when the Saunders Family decided to invite their musical friends and family up to their cabin to enjoy each other’s company and the beautiful outdoors. Jamming inevitably ensued and they quickly overflowed next door to Uncle John’s Garage where they set up a small PA backline and hosted bands and projects that the various Saunders’ were involved in.
Neighbors from the surrounding lake community began to become curious about where all of the beautiful noise was coming from in this otherwise quiet and serene setting. As the Saunders further pursued careers in music, the caliber of guests and musicians they were inviting began going up. They have hosted acts such as the Grammy-winning Mark O’Connor Band, Brooklyn-based Thirdstory, the exuberating Americana rockers Mama Juke, and sophisticated song-writers Kate Lee and Forrest O’Connor.
In 2018 the Saunders’ decided to share the event in a more public setting for the whole community to enjoy for free. They partnered with the local Caroga Arts Collective and presented the first public SAUNDERSFEST at Sherman’s Amusement Park, a local historical landmark, as part of the Caroga Lake Music Festival’s Sherman’s Revival Series. Over 500 people were estimated to visit the grounds that day as we hosted bands on two stages with continuous music from 2pm until 10pm. The Caroga Lake Chamber Players started it off with a captivating performance of Aaron Copeland’s Appalachian Spring, followed by a Singer-Songwriter Circle featuring musicians from Nashville as well as local singers. The Saunders Family Band performed their annual set and the Crooked North closed out the night with some rollicking bluegrass.
In 2019 the SAUNDERSFEST was again presented by Caroga Arts at Sherman’s Amusement Park with headline artist Mama Juke and featuring performances by the Saunders Family Band, KASA Quartet, Empire Wild, and more. When the pandemic forced the cancellation of the 2020 Caroga Lake Music Festival, Caroga Arts presented the virtual SAUNDERSFEST: Pickin’ On The Porch featuring Sierra Hull, The Crooked North, Amos Rose, and more.