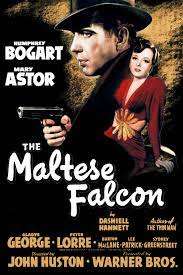 You’ve seen as a guest commentator on Turner Classic Movies (TCM)—now you can see him in person at the historic Art Deco movie house, the Strand Theater in beautiful Schroon Lake, NY. Film historian Jeremy Arnold is the author of four books: “Lawrence of Arabia: The Fiftieth Anniversary” and the TCM tie-in books, “The Essentials: 52 Must-See Movies and Why They Matter,” “The Essentials Vol. 2: 52 More Must-See Movies and Why They Matter” and “Christmas in the Movies: 30 Classics to Celebrate the Season.” Jeremy will introduce THE MALTESE FALCON (1941), one of Hollywood’s greatest detective stories and the movie that launched the film noir movement. It stars Humphrey Bogart as Sam Spade, the ultimate private eye, and features an amazing cast of some of the movie industry’s classic character actors: Peter Lorre, Sydney Greenstreet, Mary Astor, Ward Bond, Elisha Cook Jr., and Walter Huston. The film is written and directed John Huston (Walter’s son) in arguably the greatest debut of a director besides Orson Welles with “Citizen Kane.” THE MALTESE FALCON is one of Mr. Arnold’s 52 picks in “The Essentials Vol. 2.” Following the screening, the author will sign purchased copies of his books.

The second part of the two-part “Class Movie Mondays,” the program is presented by the Strand Theater via the fiscal sponsorship of the Schroon Lake Arts Council and with support from Adirondack Film. This project is made possible with funds from the Statewide Community Regrants program, a regrant program of the New York State Council on the Arts with the support of the Office of the Governor and the New York State Legislature and administered by the Adirondack Lakes Center for the Arts.